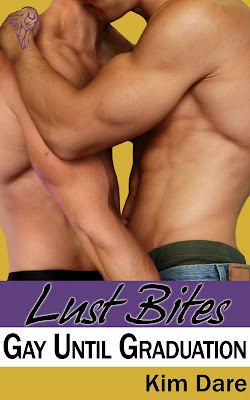 My new short novella Gay Until Graduation has just been released by Total-e-bound. It is part of the G-A-Y Collection, but it can also be read on it’s own.

A gay man should know better than to get involved with a guy who is only gay until graduation, but Baxter’s never been very good at saying no to Spencer…

Stunning, dominant and cheerfully bi-sexual, Spenser’s been screwing his way through both the male and female student population since he arrived at the university. Baxter is entirely gay, completely submissive and, by his own estimation at least, thoroughly average. He knows that being more than friend’s with Spencer would be more trouble than it’s worth.

When a drunken Spencer decides that he’s going to be gay until graduation Baxter doesn’t pay much attention. But when his friend’s attention suddenly focuses in on him, the guy he’s had a crush on for months soon becomes far more dangerous to his peace of mind.

Baxter knows he should say no to a relationship that will break his heart when they graduate, but he’s never been very good at saying no to his friend—especially not when Spencer is offering him everything he’s ever wanted.

Baxter Phillips tore his gaze away from his friend for a moment, and spared a glance for the guy with all the gossip.

Jimmy nodded and quickly tossed back the last of his beer. “He dropped out last week. Got a proper job and everything,” he informed them.

Baxter turned his attention back to Spencer. His eyes were still huge with shock, his lips remained slightly parted as he tried to take it in. Shocked and confused was a very good look on him.

As Jimmy wandered off to get another pint and find more people who hadn’t heard about Tony’s sudden departure from the university via his girlfriend’s impending visit to the maternity ward, Baxter resumed his usual occupation—that of trying not to spend all his time staring at his friend.

“I can’t believe he got her pregnant,” Spencer said, running his hand through his hair and pushing the messy black curls out of his face for a moment. “He can’t have! I mean, seriously, how did he…?”

Baxter held back a smile as he risked raising his gaze and admiring his friend rather than his beer for a few moments. “I’d assume he did it the usual way, although I’ll happily defer to the bi guy at the table in this case.”

Baxter took a sip of his beer, barely resisting the temptation to reach out and push Spencer’s hair out of his eyes for him. “You’re not what?”

“I’m not going to be bi any more. Tony screws girls—look where it got him. No more girls until after graduation.”

Baxter glanced at Spencer’s half full glass. He hadn’t thought his friend had that much to drink. “You can’t seriously believe that you’re capable of staying celibate for the next six months.”

“Hell, no!” Spencer gave a theatrical shudder at the thought. “I’ll just be gay until graduation.”

Baxter nodded. Spencer wasn’t a man who coped well with any sort of rules about what he could and couldn’t do. His latest great idea would probably last for all of another half a pint or so.

“Aren’t you supposed to be meeting Judy later?” he asked.

Spencer gave the matter deep and considerable thought for all of three seconds. Before Baxter realised what Spencer intended to do, before he could make any attempt at damage limitation, Spencer had his mobile phone out of his pocket and to his ear.

Baxter closed his eyes and then covered them with his hand for good measure as he pictured the inevitable fall out.

“No, I’m not going to be able to make it,” Spencer said into the handset.

Baxter risked a peek out between his fingers.

“I’ve decided I’m going to be gay until graduation.”

It was like watching that moment in a slasher movie when he knew someone was going to get cut into little tiny bits, but he couldn’t quite convince himself to look away.

“What?” Spencer frowned. “No, that has nothing to do with it. Have you heard about Tony?”

Baxter strained his hearing, but all he managed to catch was a murmur on the other end of the line. He couldn’t make out Judy’s actual response.

“Yeah.” Spencer glanced across at him. For a moment, Baxter couldn’t quite place the expression in his friend’s eyes. Then Spencer grinned. “Got to go.”

He hung up and stared at Baxter across the table in their quiet little corner of the Students’ Union.

Baxter held back a sigh. “Oh, God. What are you planning now?”

Spencer’s thoughtful expression merged back into a grin. “You know, you’re really hot when you do the whole disapproving thing.”

Baxter shook his head. “No.”

Spencer blinked at him, his eyes all innocent above an unbelievably mischievous grin. “You can’t say no, I haven’t asked you anything yet.”

Thanks for reading. You can find out more about Gay Until Graduation here.

Kim Dare.
Kink, love and a happy ending. Do you Dare?
Posted by Kim Dare at 17:25 No comments: