Worth Waiting For - with buy links :) 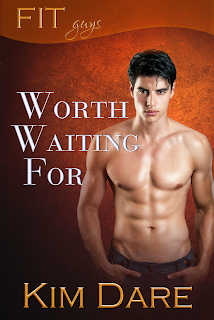 Now on Amazon, All Romance Ebooks and Smashwords.

You can also find it on Goodreads, if you want to hear what other readers think first :)
Posted by Kim Dare at 20:31 No comments:

Worth Waiting For - Available Now! 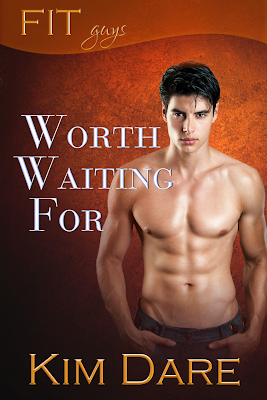 Worth Waiting For had reached All Romance E-books

(Smashwords is still a work in progress, lol)

It's been a bugger of a year with one thing and another, but I think I've finally turned a corner.

After a couple of false starts, I'm finally on the verge of releasing my first ever self published title!

I've been working on this story off and on since 2009. It's now with the proofer, and it should be ready to come out within the next month.

I have a cover, created by the lovely Kris Norris... When Colby earned a swimming scholarship to the Falcon Institute of Training, he expected to spend all his time either training or studying, but that was before he looked out of his living room window and straight into the dance studio opposite.

It’s taken Noah years, but he’s finally got his life in order. He teaches dance classes all day, hits the clubs every night and he’s not looking for complications—especially not in the form of overly-innocent swimmers who like to spy on him from across the street.

The first time Colby approaches him, Noah has no trouble turning him away. It’s only when Colby returns years later, to collect on a casually delivered promise, that Noah finds himself incapable of keeping Colby locked out of his carefully re-constructed life.

Their kinks may match up perfectly, but their lives and their pasts couldn’t be more different.Years have passed, but will what they have together turn out to be worth waiting for?

Author note: This story contains ***strictly non-sexual*** flashbacks to when one character was under 18.