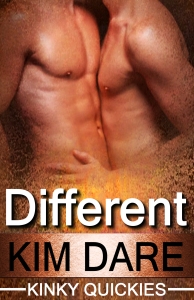 Matthew and Stuart have been dating for over five months and Stuart thinks things are going well — right up until the moment Matthew suggests that they try something different — the kind of different that involves bondage, spanking and leather.

Matthew’s been building up to making this suggestion for weeks, dropping subtle hints and hoping Stuart won’t completely freak out at the mention of kink. Now, with his desires out in the open, all Matthew can do is hope that introducing something different will make their relationship perfect rather than destroy it completely.

And a quick excerpt:


“Yes?” Stuart turned to the next page in his menu, but he didn’t look up.


For a moment, Matthew considered making a bland little comment about the weather but, no. They’d been dating seriously for over five months. There was waiting for the right moment, and then there was acting like a coward and completely avoiding the issue.


He lined the words up carefully in his mind, determined that they would come out sounding entirely casual. “How do you feel about us doing something different one night?”


Stuart glanced up from the menu. “Different?”


Matthew nodded and tried to look as if they were talking about nothing more interesting than the annoying new computer system they’d installed in the car dealership where he worked.


Stuart glanced across the restaurant table at Matthew. His expression was entirely blank, as if he wasn’t familiar with the word. “Any particular kind of different?”


The kind where I tie you up and spank you. Matthew set aside his menu and took a sip from his glass of wine and decided that probably wasn’t the best response. “Whatever kind you want to answer about,” he suggested instead.


Stuart tilted his head slightly to one side, but if he thought Matthew had lost his mind, he didn’t seem unduly concerned by the possibility. “Well… I can’t claim to be in a rush to try nude bungee over the Severn. On the other hand, there’s a sushi place that I wouldn’t mind trying out if the raw fish thing doesn’t bother you. How different do you want to get?”


Matthew listened politely until Stuart ran out of words. “What about—”


“Good evening, gentlemen. Are you ready to order?”


Matthew ground his teeth together. He’d never been more tempted to tell a waiter to leap off a cliff in his life—and that included the guy wearing a “One man, one woman. One definition of marriage.” badge, who’d served him at a business lunch a few weeks ago.


Stuart caught his eye and Matthew motioned for him to order first.


“Sounds good, I’ll have the same,” Matthew said when the waiter finally turned to him. Did his words sound rushed? Had it been obvious he wanted to get rid of the waiter? Would Stuart realise they were discussing something really important to him? God help him, he was losing the plot.


Matthew forced a smile. “Thanks.” He handed the menu to the waiter and waited impatiently until the man was out of earshot.


As soon as they were alone, Matthew leaned forward and set one elbow on the table. “A minute ago—”


Silence descended, as each of them waited to see if the other would push forward with his sentence.


Eventually Stuart nodded for Matthew to go ahead. “Before the waiter came over,” Matthew said, carefully. “We were talking about trying something different.”


Stuart nodded, just once. Did he look tense or just bored? And when the hell had Matthew stopped being able to tell the difference between the two?


Matthew took a deep breath. “What do you think about the kind of ‘different’ that involves handcuffs or a paddle?”...

You can find the book here.

In other news, the reason I haven't been blogging much is because I've been working a few different things out, and making some decisions about where I, and my writing, needs to go from here.

Hopefully I'll have answers to those questions and some news for everyone soon.