I've got a new book out - the second one in the Pushing the Envelope series. Click on the cover to check it out: 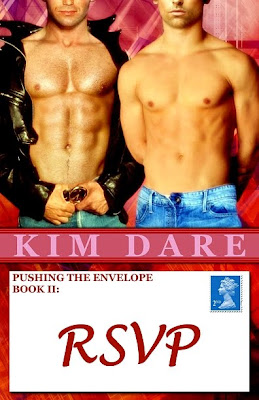 I also have a new acceptance - which is the 6th book in the same series - it will be coming out next February and is called For His Eyes Only.

And, just to complete the hat trick, I also have new cover art to share. Falling Angels is a full length novel and is due to be released sometime in 2012. 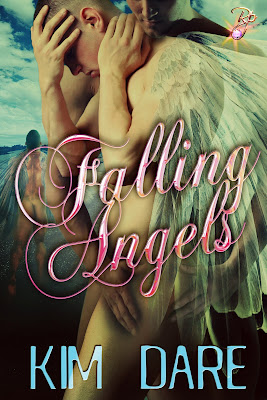 The story I'm working on next is an MM Valentine's project for a different publisher than the three I normally work with, so there probably won't be any definate information for quite a while.

Next up after that is another MM - the third book in the Collared series, for Total-e-bound. I might have some news on that one around the end of the month.

P.S. Huge thanks to everyone who commented on my previous blog post - both here and on GR and my new blog.
Posted by Kim Dare at 19:08 2 comments:

As a few people out there may already know, I’m currently working on being more “zen” and stressing out about things a lot less. Serenity, courage, wisdom and all that. The idea is to remember that reviews, schedules and everything else will happen no matter what I do, and I just need to learn to live with it. Mostly, I’m doing okay with my zen-ness, but there are still a few pet hates I have issues with. One of them is the phrase “MM stories are written by straight women, for straight women”, which will probably become clear pretty soon.

A little while ago, my zen-ness completely deserted me. I was reading a random thread on a Goodreads group. I want to be clear from the start, that the group I’m talking about is an awesome group – supportive, welcoming, open hearts and open minds all around. So when I came across a group of comments (from people who identified as both gay and straight) saying that bisexuals don’t exist – that they are either gay and in denial or straight and trying to look cool – I’ll admit my response involved quite a few tears on my part.

The group’s mods stepped in and quickly made it clear that all sexualities would be respected in the group, and did a great job of getting the thread back on to topic. But I still felt as if I’d been physically punched in the face. Bigotry in all its forms has always got to me, but this time it was a bit more personal than most.

I’m a pretty private person by nature. I’ve mentioned on blogs in the past that I’ve had a few health issues – but only after it became clear to me that there was no other way I could explain the decisions I was making regarding my writing.

I’m not an open person. I’m not a natural blogger. But I’m putting those facts to one side today to blurt out in a completely random post that I am bisexual. Since I read those Goodreads posts, it’s felt increasingly important for me to say that.

Is it important for anyone to know that when they read my books? Nope.

Is it important for anyone who has ever read bi-phobic comments on the internet to know they’re not as alone as I felt that night? Maybe it is.

Bi-invisibility isn’t something I’ve thought about a lot until recently. I’m not dating or really looking for anyone at the moment. So, in some ways, I’d filed my own sexuality away as unimportant. I’ve realised now that I was wrong to do that. It makes it seem like I’m ashamed of the fact I don’t care if the person I fall in love with is a man or a woman, and that’s not true.

So, to bring me back to where I started this post…

My particular MM stories, just like the MF, FM, FF or ménage stories I write, are written by a single, female, bisexual submissive. And they are, first and foremost, written for people like me.

Anyone who wants to read them – male/female/gay/straight/(insert whatever you like here) is more than welcome to read them. If you like visiting a world where things tend to be sweet as well as sexy, or cute as well as kinky, then as far as I’m concerned, you are “people like me”. Come on in, you’re more than welcome, and no one is going to check you for labels at the door.
Posted by Kim Dare at 13:58 7 comments: