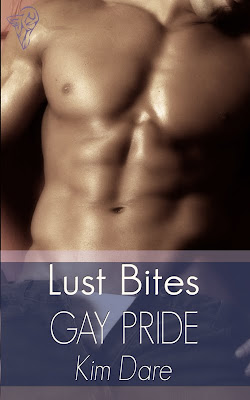 I have a new e-book out today.

If you like the bratty subs from any of the previous books, Gay Pride one might be one for you!

A naked submissive and a rainbow coloured flag, what gay dominant could resist?

Crenshaw hasn’t had much time to hit the leather clubs since he got really involved in the gay pride movement, but when he finds a drunken submissive standing on his doorstep wearing nothing more than a rainbow coloured flag, it’s obviously time for him to get back into the game.

Jayden might not be really into the whole gay pride thing, but he’s very proud of his plan to get Crenshaw’s attention. All he has to do now, is convince the older man to keep him around once he’s sobered up.

The young man was naked, bar the rainbow coloured flag. He’d wrapped the material around his shoulders and draped it over his body, but as the wind caught at the edge of the fabric it was impossible to miss just how bare he was behind the scant covering.

Mr. William Crenshaw looked his visitor up and down and quickly came to the conclusion that he’d never seen him before in his life. He’d have remembered a face like that. Bright blue eyes peeked out from behind a messy mop of blond hair as the breeze blew the several golden strands across the boy’s face.

As he reached up to push his hair out of the way, the boy almost lost his grip on his flag. Crenshaw caught a glimpse of beautiful lines of slim muscle before the younger man pulled the fluttering fabric back into place. He’d have remembered a body like that too.

Crenshaw pulled his attention back up to the other man’s eyes. “Hello.” He waited for the other man to say something else, perhaps even to present some explanation of why he was standing on his doorstep. The guy offered him a hopeful little smile, but that seemed to be the only contribution he intended to make to the conversation.

Holding back a sigh, Crenshaw looked past the man who’d rung his door bell and glanced both ways along the quiet street. The car he expected to see parked a little way down the road wasn’t there. At least, there was an unfamiliar car, but it didn’t contain any of the men he’d assumed that it would.

On the positive side, the vehicle didn’t contain any paparazzi either. That was something to be grateful for, at least.

Crenshaw’s visitor turned and followed his gaze. “Were you expecting someone else, sir?” He sounded quite worried about the possibility.

“No, I wasn’t expecting anyone.” He’d actually been quite content with the prospect of some peace and solitude after a day filled with meetings crammed full of men who thought their point would carry more weight if it was shouted very loudly.

A relieved light filled the younger man’s eyes. He smiled as he shrugged his shoulders in an effort to stop the flag from slipping away again. Crenshaw took a deep breath and resisted the temptation to let it out as a sigh. When the man facing him looked so young and clueless, it was hard not to feel old. The flag bearer couldn’t have been far into his twenties. His nervousness made him appear even younger.

“Exactly which of the leather clubs are you attempting to join?” Crenshaw asked with as much patience as he could muster. He hadn’t heard anything about any new subs being hazed in anywhere that weekend. Although, it had been so long since he’d found time to hit the clubs and play, it was hardly surprising that he’d lost track of what had been pencilled into the local kinky calendar.

The relief drained out of the younger man’s eyes to be replaced with confusion. “Sir?”

The honorific implied that he had some tiny clue about the world he was trying to work his way into but, if Crenshaw was any judge, that was the full extent of his knowledge. Whatever idiot thought the boy was ready to try and become a formal member of any club deserved to be soundly whipped—unless they were a masochist, of course, in which case they deserved to be soundly barred from the pleasure of a whipping for the foreseeable future.

The boy rocked back onto his heels. He righted himself just a moment before Crenshaw reached out to keep him on his feet. “You’re drunk.”

Crenshaw ground his teeth. “Who sent you here?” If nothing else, he would have to find out which club the sender belonged to—if only so he could make his opinions on getting young men drunk and sending them off to submit to strangers very clear.

If this was any indication of the way standards had slipped while he’d been focusing on other things, there was no doubt that he’d have to find the time to visit the clubs more often.

Being discreet about his taste in leather was one thing, but he was damned if he was going to let a certain type of reporter keep him out of the clubs forever—especially not when the local scene seemed to be going to the dogs in his absence.

Congrats on the release!!