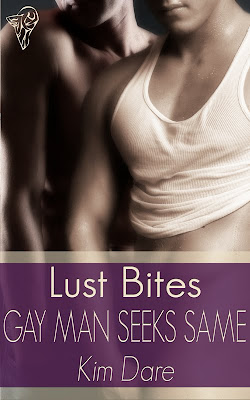 Just click on the pic to find out more.

Can a man who wants nothing more than to be part of a boring old married couple really find happiness with a man whose relationships have only ever lasted until he zips up his fly?

Craig knows what he’s looking for in a lover. He wants someone just like him—a nice guy he can build a nice, simple, uneventful life with. He’s hoping that’s just the sort of man who will answer his internet ad.

Donovan’s nothing like Craig. He’s all about leather, fast cars and relationships that last hours rather than years. They may work at neighbouring desks, and Craig may have a crush on his colleague, but that doesn’t mean he should forget about the kind of man he’s sure will make him happy in the long run.

“You realise the guy’s never going to recognise you from that ad?”

Craig McKinley ignored the question and frowned at the choice of ties laying on his desk. Red. Blue. Red. Blue. He reached for the blue, hesitated and went back to looking at each strip of fabric in turn.

“I said—” Donovan began again, from the desk to Craig’s right.

The tie was the thing to concentrate on. Pick the right tie and everything would be fine—or, at least, he’d feel more appropriately dressed when everything went wrong and it all hit the fan.

Craig nodded to each point as the slightly older man recited the ad at him. “Like I said—I told the truth.”

Donovan made a sceptical noise in the back of his throat. “Maybe—more or less.”

Craig frowned, wondering which part of the advertisement the other man thought he was lying about.

Craig didn’t need to look to the side and see the other man’s expression. He’d spent long enough staring at Donovan over the months they’d worked at adjoining desks to know just how the other man’s eyes sparkled when he teased.

Heat rushed to Craig’s cheeks, despite the fact he knew Donovan flirted with everyone in the building, male and female, in exactly the same way. Craig mentally rolled his eyes at himself. Eight bloody months, and the guy could still get him all hot under the collar with nothing more than a casual compliment.

“But that’s not my point,” Donovan went on. “He won’t recognise you, because he’ll assume you were lying. No one tells the truth in that sort of advert.”

“The kind of man I’m hoping to meet would.”

Donovan let out a long suffering sigh. “If you’d let me take you to a club rather than put some ad on the internet then—”

“I don’t like clubs, and I’m not looking for some drunken one night stand.” As soon as the words left his mouth, Craig followed them up with a string of silent curses inside his head.

He gave in to temptation and glanced to his right. His colleague appeared more amused than offended. Donovan lounged back in his office chair, denim clad legs sprawled out under his desk as if he was relaxing in a pub rather than sitting in an office.

“The men I’d meet in the clubs around here would be…” Craig trailed off.

“Men like me?” Donovan’s lips twisted into a lopsided little smile. Craig was sure it was that smile that had all the guys in the local gay clubs queuing up to spend a night in Donovan’s bed, or to join him in the alley, or…Craig wasn’t sure of the details. He tried to avoid hearing any gossip regarding the other man’s sex life.

He didn’t need anyone to help him picture Donovan having sex. He was quite capable of doing that on his own—and it was far more fun to do so in private than while standing around the vending machine. Especially since the last thing he wanted, was for his colleagues to guess just how much he enjoyed imagining the other man doing a wide variety of interesting, x-rated things.

Donovan leaned even further back in his chair, stretching his arms above his head until they almost touched the work station behind them. Craig’s eyes raked down the other man’s body, from where his t-shirt pulled tight across his pecs and rucked up to expose his abs, then further down to the low slung waist of his jeans. A light dusting of brown hairs formed a pretty little happy trail that disappeared into his fly.

It wasn’t just the smile that made everyone so eager to spend an evening in Donovan’s company. Craig snapped his attention back to his ties and his plans for his lunch hour.

“I’m just looking for someone…someone more like me.” Yes, he repeated inside his head. That’s what he was looking for. Someone ready to settle down, someone who thought a relationship should be counted out in years rather than hours. He was not looking for a Donovan Stone.

Congrats on the new release! Sounds like another winner. :)