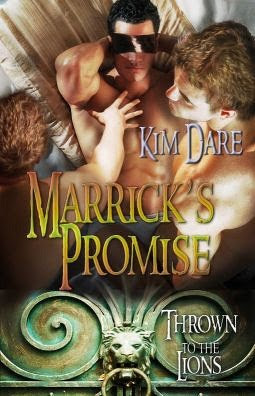 Marrick thinks that being thrown to the lions will be the ultimate adrenaline rush, and he’s not disappointed. But his plan is to try everything life has to offer once. He has no intention of visiting the lions again.

Blaine and Luther don’t expect to give any of the human sacrifices they share another thought once they leave the den. This man’s different. They have no intention of letting this one go. The only question is, while they are willing to share Marrick with each other, are they willing to share each other with a human who could become as important to each of them as they are to each other?

As far as Marrick Powell was concerned, there was only one thing better than one naked man pressed intimately against his skin, and that was two naked bodies, completely surrounding him with a solid wall of heat and strength.

Lions…the very thought of the shifters had kept him hard ever since the guys at the pub had first put him, bound and blindfolded, in the back of the limo. The reality of it was so much better than any of the possibilities his imagination had managed to cook up—especially since there seemed to be a fantastic buy one get one free offer on werelions that night.

Rough gravel bit into Marrick’s feet as he wriggled between the two shifters, but that wasn’t important. His squirming informed him that the guy behind him was just as hard as he was. Sore feet couldn’t compete with that sort of knowledge. Arching his back, he explored the other man as best he could while his hands were still bound behind his back.

The man…the lion…the…whatever the hell he should be called, was all gloriously hard muscle. Marrick pushed his arse back in encouragement as the tip of the other guys cock nudged against the cleft between his buttocks.

Someone purred in his ear. Rough palms slid down his arms. Another set of equally demanding hands slid up his chest, exploring him as if it was their right—as if he’d given them that right when he agreed to be their human sacrifice for the night. Marrick grinned blindly into the night air as an extra shot of adrenaline raced through his veins as the truth of his situation sunk in. He redoubled his efforts to explore the other men in return.

Great builds, equally impressive cocks—there were some things he was soon certain of. But the men could still have been twins for all Marrick was able to tell them apart through his blindfold. They moved around him, caressing and assessing him, changing places with each other until he had no idea which man had originally been where.

A tiny part of him cared which man was which. Most of him really didn’t give a damn. It wasn’t as if he was ever going to see their faces, as if he’d ever meet them again. The pure anonymity of it all made his heart race faster, his body arch into their touch even more eagerly.

Bungee jumping had been a rush. White water rafting better than he’d ever imagined it could be. But, in that moment, Marrick knew that being thrown to the lions was easily going to be the best thing he’d ever tick off the extensive list of things he was determined to squeeze into his life. Even the whips wielded by the local doms couldn’t compete with the endorphins just being close to the lions sent swirling through him.

One of Marrick’s soon to be lovers purred his approval against his neck as Marrick managed to force his restrained hands into a position where he could wrap his fist around the shifter’s cock.

He was just like a very well hung human—except for the fact his whole body was hotter than any man Marrick had ever known. The cool air that blew across the driveway didn’t seem to worry either shifter. Caught between them, Marrick found himself content to let the party start wherever the hell they wanted it too.

Gravel marks on his knees probably wouldn’t be that much more painful than carpet burns, and if the sharp little stones broke the skin, Marrick gave a mental shrug—he knew he’d enjoy looking at the scars when the blindfold came off.

The voice didn’t come from either of his new friends. Disorientated from the lions’ inspection of him, Marrick could only assume it originated from inside the house. He moaned his disapproval as the other men slipped away from him, leaving him with nothing more than their hands gripping his arms as they led him forward.

The hands on Marrick’s arms remained long after they came to a halt. It didn’t take him long to realize that all three of them were facing someone else now. Marrick tried to get a sense of the room and who might be studying him and his new friends.

He had the distinct impression he was being inspected, but it was nothing like feeling a voyeur’s gaze traverse his skin—he’d felt that often enough in the clubs. The gaze felt more like the way he imagined a betting man might judge the worth of a boxer about to step into the ring. It was impersonal, practical, and had a strange way of making a man hope it would declare him up to scratch for the bout.

“I take it there’s no need to ask if you two are interested in him.” The voice was deep and rich, and whoever it belonged to wasn’t making any attempt to hide his amusement. Marrick grinned, guessing the other two men were still just as hard as he was.

“Yes,” someone said to his left. The man on his right said nothing. Marrick could only hope that was because he’d offered up a silent nod instead.

“He’ll probably enjoy himself far more if you leave his arms in working order.” A hint of seriousness crept into the voice facing them.

The hands on his arms instantly eased their grips. Behind the blindfold, Marrick frowned. They’d felt pretty bloody good as they were. The grips didn’t tighten again, but the men’s hold did alter as he felt someone step in front of him. Barely a fraction of a moment later, the other man’s hand slid against his skin and Marrick felt the second shifter move behind him.

The lion in front of Marrick pulled back a little as he seemed to hesitate. “If you say ‘sword’, we have to let you go.” The words were little more than a rough purr.

The still un-named lion behind Marrick lined his body up against him, pressing a hard shifter-cock against his arse. “If you don’t say it, we can do whatever we want with you.” His voice was harsher, and dominant enough to send an expectant thrill down Marrick’s spine.

He waited impatiently for one of the men to move. The entire room seemed to hold its breath, waiting with him. A full minute passed.

“They won’t do anything until you give them your answer.” That was the deeper voice again.

Marrick blinked in the darkness behind the blindfold as he realized they weren’t waiting with him, but for him. “I understand. Safe word’s sword. Got it.”

The words before hadn’t been a purr. The noise the shifter in front of him made as he brought their lips together was a purr. The vibrations shot down Marrick’s spine and rushed straight to his cock, making him moan as he parted his lips and invited the other man to deepen the kiss.

Once more surrounded by naked skin as the shifter behind him pulled him closer, Marrick rocked his hips rubbing his arse against one lion, his cock against the other, and any bit of skin he could, against any available portion of the other men’s bodies.

Tugging at the bindings around his wrists, he tried to work out if he could squirm his way out of the cuffs. The blindfold was fair enough. Anonymity—a few hours stolen away from the real world where a man could do whatever the hell he liked and never have to face the other guy, or guys, in the morning. He was all on board for that. The blindfold was hot. The cuffs were just bloody well annoying.

Either the lions didn’t notice that he was trying to get rid of them, or they didn’t care. The lion in front of him, the one called Luther, broke the kiss. A moment later Marrick’s face was turned, his mouth captured by another eager pair of lips.

A rough tongue thrust into his mouth demanding to taste him. Marrick’s tongue stroked against the shifter’s, eagerly sparring with him as he tried to explore the other man’s mouth in return.

The lion slid his hands into Marrick’s hair as they fought each other for control of the kiss, but the shifter’s grip on him provided scant advantage, especially when he kind of liked the way the guy tugged at the short black strands.

Marrick was almost as good at controlling a kiss as the other guy—almost. Pleasure rushed through him as the other guy wrangled control from him and refused to give any scrap of it back.

As one kiss was broken and the other lion took his turn possessing Marrick’s mouth, one of the shifters wrapped his fingers around Marrick’s cock. His grip was strong, his strokes rapid, but at the same time, he could tell the other man was holding back on him, gentling his touch when he could easily have been rougher.

Sod that. There was no way he was going to stand for being treated like some fragile little princess. That wasn’t what he’d signed up for. He could hold his own in the best leather clubs in the city, and he’d be damned if he wouldn’t do the same in the lions’ den too.

Ack! How did I not know this was coming out?! I haz promo FAIL! Wanna kick something off tomorrow??!