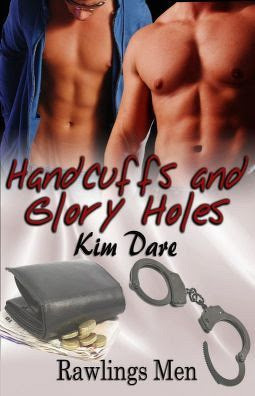 Police Sergeant Conrad Rawlings likes glory holes. As a dominant who’s never learned how to feel casual about even the most fleeting hook up, he’s learned to cherish the complete anonymity they provide. Still, when he hears a cubicle door open as he leaves the back room of a club, he can’t quite help looking over his shoulder.

Submissive Willis Evans doesn’t know why his master ordered him to make sure the stranger from the glory hole sees his face before he leaves the club, but he knows the price for disobedience. Willis does as he’s told. The moment their eyes meet, he can’t help but hope he’ll be allowed to see the other man again.

They are going to meet again, but it won’t be under conditions either of them could predict. Willis’ master has a plan—one which could easily break them both.

The door leading into the back room of the club creaked open. It was the cue Willis Evans had been listening for, for over twenty minutes. As the sound of footsteps crossing the tiles floated into his cubicle, Willis lowered himself to his knees. The floor in the pokey little space was much the same as he’d always found it—cold, hard and far from clean.

The partition wall shuddered as the door into the neighboring cubicle was pulled closed behind its new occupant. Willis took a deep breath and let it out very slowly when he heard the lock on the other man’s door slide into place.

All his attention focused in on the hole between the adjoining spaces. A few seconds passed, and a foil wrapper was offered through it. Willis stared at it for a moment, as if he’d never seen a condom before. Finally, his brain kicked into gear. He took the packet from the man on the other side of the glory hole.

It was nice of the guy to offer him the choice, but a second’s consideration had Willis slipping it into the back pocket of his jeans. No point wasting it on a blow job when there might be someone who’d be willing to use it for something more than that later.

Fabric rustled. Willis turned his gaze back to the hole linking his world with the other man’s. The edges of the opening might have been rough when it was first cut, but at some point some practical-minded visitor to the club had covered the perimeter with masking tape. The DIY job had been pristine when Willis had first visited the cubicle, several months ago. The strips were peeling away now, battered by constant friction.

Past the circular frame created by the remaining partition, Willis watched strong hands reach for a button up fly.

The lighting was dim, full of shadows, but as Willis stared through the hole, he could have sworn a spotlight shone on the other man’s crotch, as if it was highlighting a personal little peep show, being put on just for him.

The top button slipped through the denim, then another. The hands that unfastened the other guy’s fly were big, masculine—a working man’s hands.

More buttons were quickly undone, it wasn’t long before Willis knew his first ‘date’ for the evening was going commando. Pushing back the denim, the other man exposed a long, thick shaft, already half hard with expectation.

The guy wrapped his fist around his cock, stroking himself three or four times before finally offering his cock up to the hole. He was tall, the hole was only just high enough to accommodate him.

Licking his lips, trying to work some moisture in a mouth left dry by unaccountable nerves, Willis leaned forward and took the tip of the offered cock into his mouth. There was no reason to be anxious. It was just a blow job—he should have been able to do that in his sleep by now.

Willis closed his eyes as simple instinct encouraged him to suckle gently around the head of the other man’s cock while it rested snugly inside his mouth. He took a little bit more of the shaft between his lips, dipping his head toward the hole in the partition.

A tiny satisfied sigh drifted through the partition and, as easily as that, something inside Willis settled. The pleasure in the soft little sound soothed a part of him that had been neglected for far too long. It was just a blow job—just a chance to feel another man’s pleasure and know he was the guy who made the other man feel that good. As Willis felt all his concerns about the wider world begin to fade gradually away, there was no just about it.

To buy the book, or read a longer excerpt, just click on the cover at the top of the post.
Posted by Kim Dare at 16:02

Congrats!!! I'm glad it all came together for today. :) Drop me an email at my other address. :D

Congrats on the new release! :)